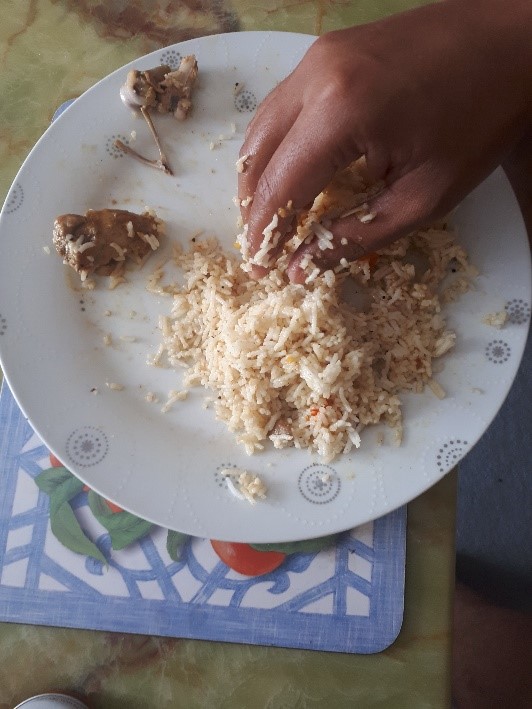 Because many in our UK Nepali community are first generation settlers, the traditions secular and spiritual/religious around food and drink are particularly strong and vibrant.  In this section of the information resource some of these customs and traditions are detailed.   Knowledge of home cooked Nepali cuisine is however very limited outside the community and although the country has almost 200 Nepali restaurants, these still largely concentrate on providing a range of South Asian dishes closely aligning with Britain’s Indian restaurants menus, rather than – with very few exceptions – concentrating exclusively on Nepal cuisine.

To experience Nepali home cooked traditional and contemporary cuisine is therefore almost entirely inaccessible to the broader general public unless you work with UK Nepali community members or have Nepali friends or a Nepali husband or wife.  Culture is inextricably linked to home cooked food in Nepal and in the UK Nepali community, with homes providing the ideal setting to discover that culture, which is very difficult to access in restaurant settings.  Here we provide information about the spiritual & cultural dimension that permeates Nepali food.

Universally, the belief is shared across all sections of the Nepali community that once food and drink have been touched by the lips and mouth, they become unclean for others to eat or drink.  So, situations where food that can’t be eaten is offered to be shared with others, is unheard of.  This is unsurprising since especially food and to a certain extent drink is regarded as a gift of Heaven, the gods and goddesses, and the ingredients that make up food dishes, gathered with great effort and care.

To leave food therefore is regarded as an unspiritual act, and disrespectful to those who have provided it. The principle extends to always leaving the plate completely clean, through hand or use of flatbreads (roti); this particularly so with those from Bahun [Brahmin] Chettri castes.  One practice that has had much more reduced transfer to the UK from Nepal is that of the requirement to wear fresh, clean clothes & linen when preparing food.

This is still common, traditional practice across much of Nepal, particularly outside the capital and the bigger cities, and in some older generation UK Nepali families this practice is maintained where able.  Although becoming less commonly practiced in UK Nepali families, rules of food transfer (who gets served first) have been in Nepal traditionally hierarchical, to reinforce the social hierarchy and interdependency of family and broader social relationships.

In addition, a further traditional ritual purity practice, concerns women during their periods of menstruation, not being allowed to cook or in the kitchen. This practice is still quite widespread in Nepal (but it is lessening gradually, particularly in parts of the Kathmandu community and in those more subject to Western education and related perspectives), but much less common in the UK Nepali community, partly for practical reasons and partly due to UK Nepali female academics educating on the topic to explain it is not justified on hygiene and ethical grounds.

Use of the hand (right hand: see image at the start of this page and on the Utensils page ) as a utensil for eating, and the customary washing of mouth after a meal.  Both these practices are still widespread and much honoured across much of the UK Nepali community, and concern cleanliness, hygiene, and also partly in the case of the use of the hand (only the right, never the left which in traditional culture is associated with cleaning after using the toilet) because of its utility for mixing food together.

Food is combined by the hand, and to eat once the palm is moderately filled with the food portion, the thumb is used to push up/scoop the latter into the mouth.  In addition, when drinking water from a bottle, a common accompaniment to Nepali meals, the mouth shouldn’t touch the top of the bottle.

In the UK it is still common amongst Nepalis, including young Nepalis, practicing traditional customs to if staying for any length of time with friends, including Western/British ones, to offer to cook, or help in cooking.  This is a mark of respect towards the host and considered superior to providing material thank you gifts only, as care and effort goes in to cooking.

There is substantial transfer of the important role of food as a focal point of Nepali community socialising in the UK.  Presentation of food whether as a snack or a feast (bhojan) gives the setting for leisurely catch ups on news, or even watching a favourite Nepali TV programme (talent shows, etc. often also from India) via the internet.  A favourite food-focused social occasion is the momo (see recipe LINK) party in which this famous, delicious Nepali dumpling is served with golbedaa achar. News from Nepal on friends and family feature large at such social gatherings, as well as news of Nepal and about developments and events in the UK Nepali community.  Dal bhat tarkari and (for non vegetarians) dal bhat tarkari and chicken, the national dish, is the normal fare for a main meal for such socialising occasions.

Some Festivals and Ceremonies with special associations with food:

The Gaura Festival (Gaura Parva) – which involves a five-day fast — is associated particularly with the Far West and parts of the Mid West of Nepal, and takes place in late August/September in the month of Bhadra (Nepali months are linked to the Lunar calendar and begin and end in the middle of Western calendar months). The festival, which takes place over five days and is particularly celebrated by women, is named after the goddess Gaura, the wife of the Lord Shiva, and is celebrated by rituals (these can vary according to the location the festival takes place in) and festivities to wish Shiva good health and longevity. As such it epitomised marital devotion from the side of the wife, and across the festival women chant mantras and folk songs are performed – powerful bonding, spiritual activities that preserve and continue Far Western (Doteli) identity.

It has a special, major connection with food however, through Biruda, which is a mixture of five seeds (initially kept together in water in a copper pot) associated with the different elements (from fire, to air): Biruda gives health and long life.  The five-day festival culminates on the final day with the Paancha Biruda mixture, breaking the festival fast by swallowing the five types of combined seeds, whole, and with afterwards the remaining Biruda being made as a stew, which is the final day’s special dish.  The cereals and pulse used are: wheat, Gahot and Gurao (two types of lentils), Black Gram, and Peas, which as mentioned each conform to the Five Elements. Gaura Parva is also famous for the Deuda Dance; a dance in which all participants hold hands (women and men separately) and form a circle (this can often involve more than a hundred people at a time) and perform a step dance, symbolising interconnection of individuals within the broader community.  At the end of the festival new sacred threads are taken by married women; Gaura Parva can therefore be rightly said to fill the role of an annually performed act of devotion towards ones husband and marriage. Beyond the Doteli people and culture there is a nationally celebrated annual festival, the Janai Purnima, the Sacred Thread changing festival: again this is associated with a special food, the delicious and nutritious Kwati (comprising nine types of beans) dish.

We conclude with the topic of the Sagan Ceremony (performed by both Nepali Hindus and Nepali Buddhists), which is imbued with spiritual purpose albeit of different kind to that of Gaura; with rites around food being at the heart of the spiritual devotion and related contemplative purposes of both through the interconnection of Nature & life, and humankind, through symbolically and spiritually important foods.

The Nepali Tantric Five Elements: Again, as with the Gaura there are five, and they relate to spiritual concepts of pure Tantric kinds.  The Panchatawa (the Five Tantric Elements) are: Fire (Agni Tatwa), which is symbolised through rice wine; Earth (Privithi Tatwa), symbolised by meat; Water (Jal Tatwa) symbolised by fish; Ether (Akash Tatwa), symbolised by lentil cake, and Air (Wayu Tatwa) symbolised by egg (eggs may be replaced by sweet ball Laddu or by meat balls (Lagwah).  The concept is that living entities, humankind, animals, etc. whilst alive hold heat and warmth (fire), and when dead, become earth, from which are found and released, water; breath is air and exists in both space and ether.

The Sagan Ceremony is a very important Newari spiritual & religious practice, particularly in the Kathmandu Valley.  The ceremony takes place not on a fixed day in the calendar, but on a range of different special occasions such as New Year’s Day at the start of the Nepali New Year, birthdays, weddings, and in old age.  In addition, the Sagan ceremony is performed often when setting out on or returning from a long journey or one of special importance. It is also performed if one has survived nearly losing ones’ life in an accident, or for achieving some exceptional accomplishment.  The ceremony focuses on the honoree (but with other participants too) who will sit cross-legged or seated while the rites take place, including daubing of tikka on the forehead and the one honoured and participants also receiving a daub of dahi/yoghurt on the forehead.