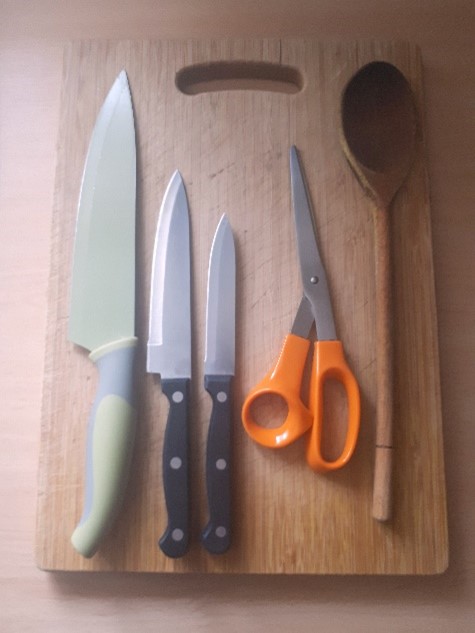 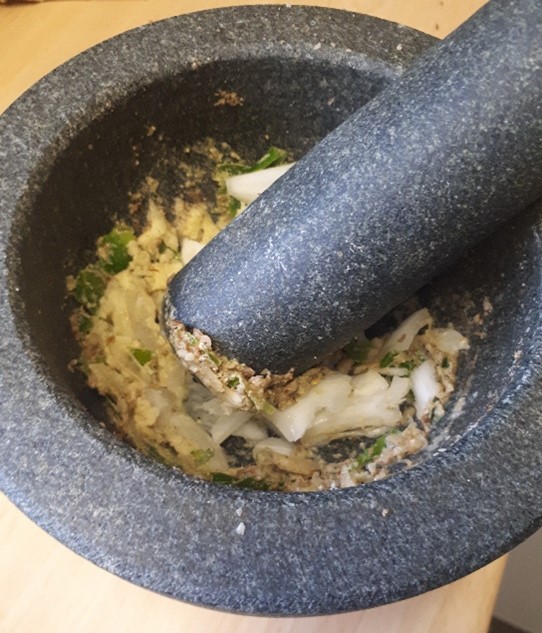 Knives  — various sizes and types, such as carving knife for meat preparation, through to small knives to chop and slice raw ingredients such as chilis, garlic, ginger

Chopping board – for dicing and cutting vegetables, hers, and meats

Saucepans — with and without lids, and in a range of sizes

Mortar & Pestle – made of stone, and very heavy, these are an essential utensil used in Nepali home cooking, as they are the traditional implements for turning finely ground ingredients to pulp, particularly for creating the more liquid forms of Achar (such as accompany Momos)

A pallet-type container — usually metal and circular, for spices in use

Scissors – to cut and trim some meats, and for some vegetables’ preparation (such as spring onions)

Forks and spoons – also used to stir ingredients, as well as eating utensils 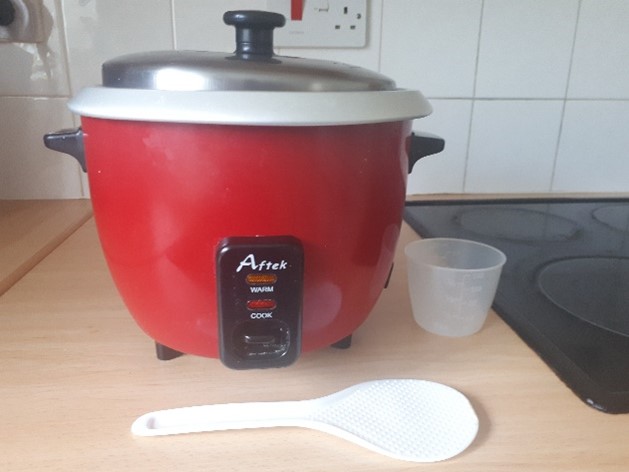 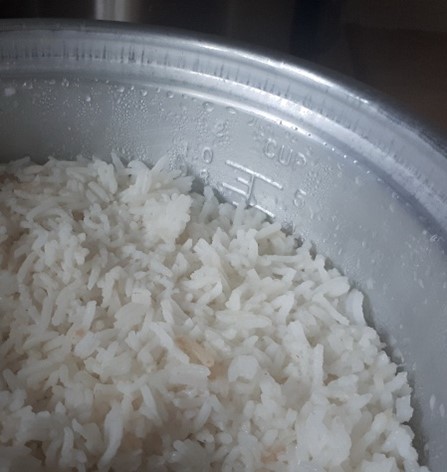 Rice cooker: rice cookers are indispensable for most main Nepali home-made dishes, as rice is the staple accompaniment.  Rice cookers have two settings (illustrated above) of ‘cook’ and ‘keep warm’ and have on the inside of the metal container, measuring marks for quantities (such as for two people, five people, etc).  With rice cookers comes a plastic rice portions measure (see above), and in the lid of the rice cooker itself are small holes (the key part of the rice cooker) to release the steam as the rice comes closer to its final stage of steaming 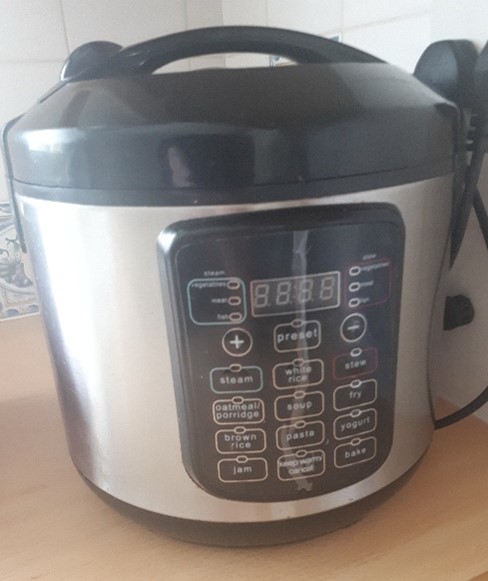 Pressure (multi) cooker: Pressure/multicookers are commonly used now, especially in settings such as UK Nepali diaspora community members homes, and cut down on the number of stoves, hotplates, pans needed 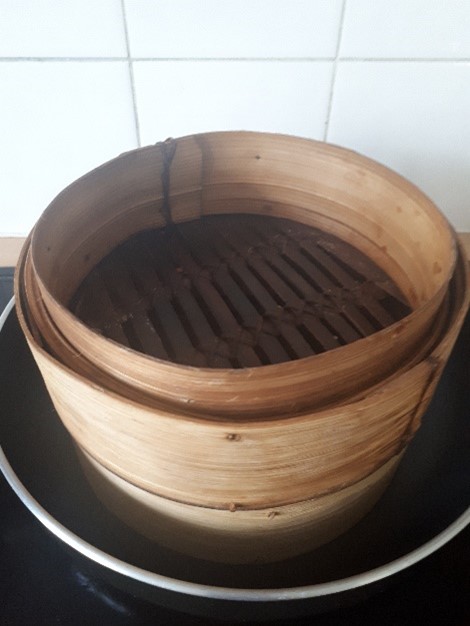 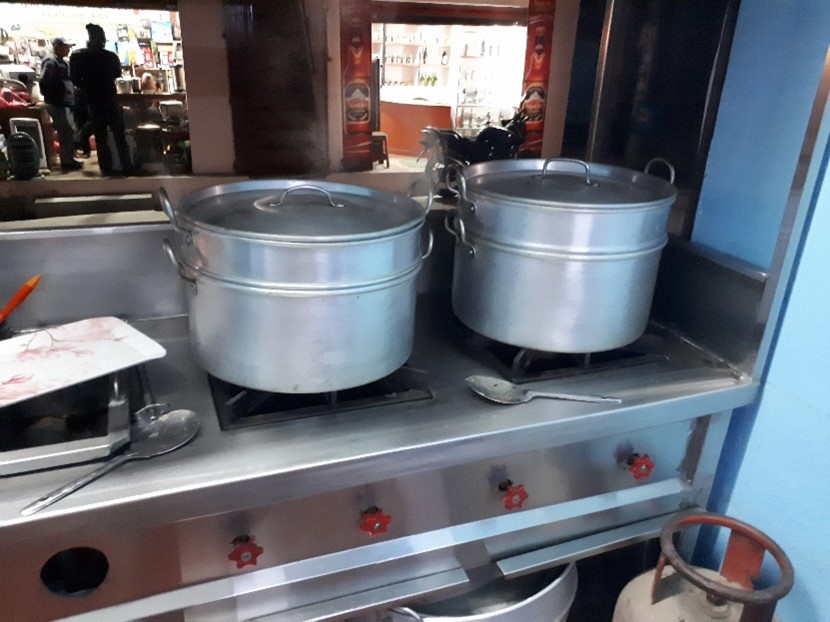 Dumpling steamer:  traditional Chinese bamboo two-tier example illustrated above are often used in diaspora [non-Nepal] settings such as the UK; these have the same (at more convenient for domestic cooking purposes size) function of the large pan metal steamers used in eateries in Nepal (Kathmandu setting example also included above) and elsewhere

The microwave oven: essentially used for warming food that has been stored in the fridge 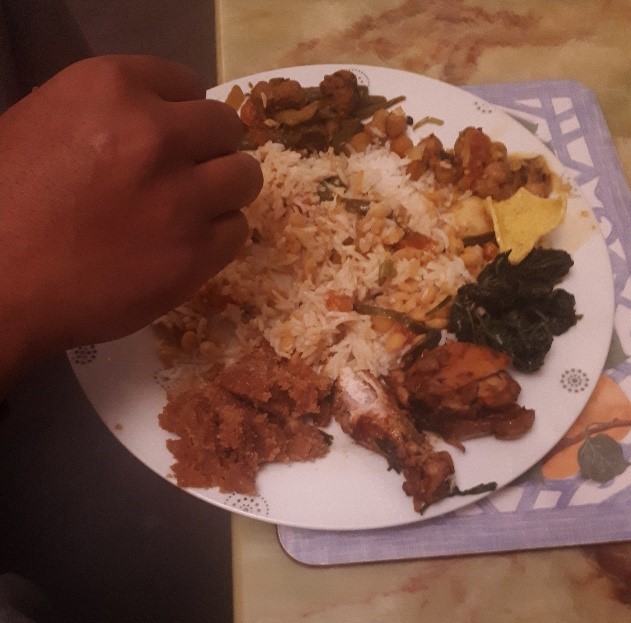 Eating with the right hand is the traditional method of taking most Nepali dishes, rather than using a knife and fork.  Hygiene is a distinct part of Nepali food and eating culture. Washing of hands before and after eating is a fundamental of Nepali culture, and it is felt that nothing should be cleaner – therefore more appropriate to eat with – than one’s hand.  The right hand is used for eating, whilst the left in earlier times was associated with using the toilet: this two-hands, different purposes, method is according to the right or the left-hand known in other ancient cultures in regard to hygiene.

In Nepali diaspora communities in the West, such as the UK, the use of the right hand is making place for Western cutlery such as the knife, fork, and spoon, especially amongst younger and second generation community members, and sometimes where those eating the meal may be Western guests as well as Nepali.

On finishing eating, it is customary for Nepalis to rinse out the mouth too with water. 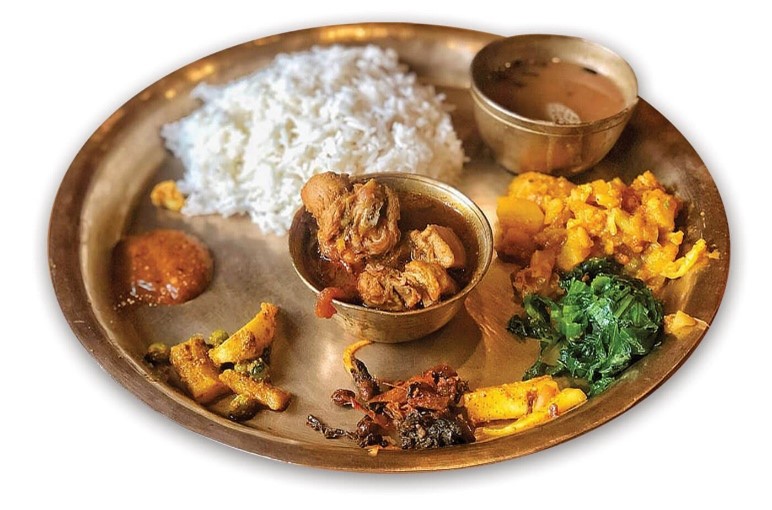 The Anti is the traditional Newari alcohol jar.  Commonly made from brass, these can range from the functional to the elegant.

Newars have traditionally and still largely cook, store and serve food and drinks in containers and utensils made of gold, silver, copper, brass, iron, clay pottery, dried rice stalks.  They have also traditionally used corn/maize leaves and also the leaves of particular trees, sewn together using wood toothpicks, to make plates and bowls. 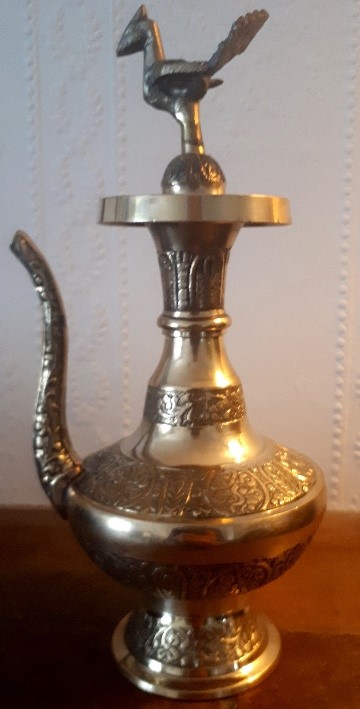 The Sherpas use wood, stone, bamboo, and ceramic in household food making and serving utensils.  Mr Sana Sherpa, President of the UK Sherpa Association lists the most commonly used and important utensils as:

Wooden and bamboo utensils are made by Sherpas, but iron ones are purchased. In the early 21st Century most Sherpas have some Western modern cooking utensils in the home kitchen, which have in some cases superseded traditional Sherpa ones.