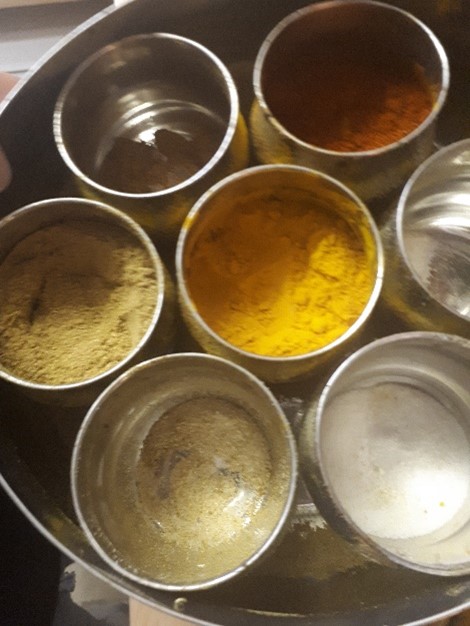 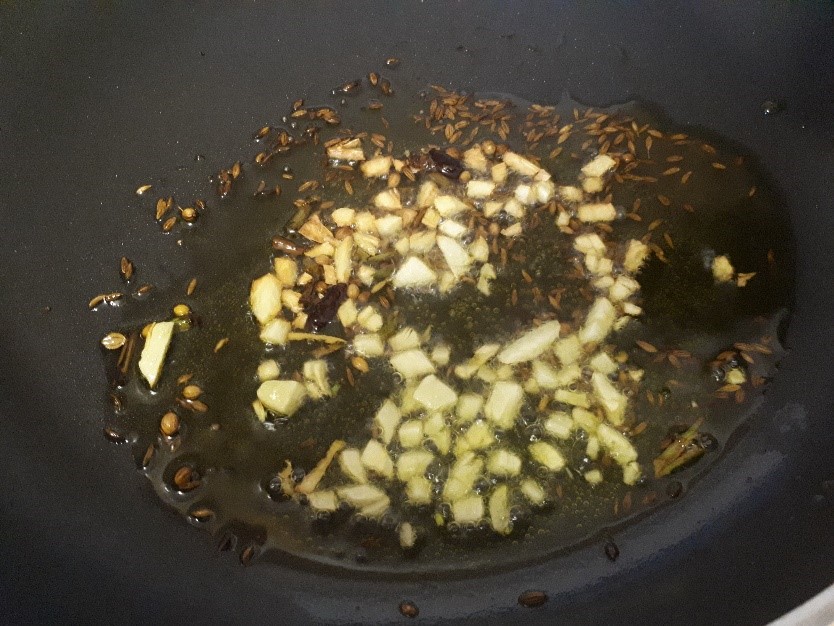 The major spices of Nepali cuisine are coriander (Dhania), cumin (Jeera), chili-pepper, pepper, salt, and (for colour) turmeric: there are many other spices that are also very popular in Nepali home cooking.  Herbs in powdered or fresh forms are also indispensable in Nepali cuisine.  The images above are from Deepak’s kitchen, featuring his spices selection and chopped Lasun (garlic) and Jeera (Cumin) seeds in frying pan.

Black pepper is called the king of spices: a very effective flavour enhancer (like salt) it is known to offer health benefits, promotes good digestion and weight loss, and can be of value in relieving colds and treating dermatological problems.  Red peppercorn, course or ground are also used on their own or in combination with other spices, in some Nepali dishes.

Cardamom is a hybrid splice made from the seeds of a number of different plants, and originated in South Asia, and its extracts, oils and seeds have been used in traditional medicine from very early times. It can help in lowering blood pressure, is an antioxidant, and has diuretic effects; it also is thought to contain compounds important in fighting cancer.

Green (hario), Red (raato)*, dried (as with Szechuan cuisine in China), and powdered are the main culinary forms of chili, which come in different sizes and degrees of heat intensity (birds eye and scotch bonnet being some of the hottest): they are commonly used as a spice to heat dishes.

* NOTE: red chilis are prepared for Szechuan dried style (you can buy them already dried too, but they will not be so freshly prepared as in this method), by placing and turning on a hotplate

Cinnamon (source: the inner bark of trees named ‘Cinnamomum’) has legendary medicinal benefits, known of from the earliest times, and in more recent ones confirmed by scientific research, it once gathered curls to form cinnamon sticks, which are commonly then ground to provide cinnamon in its powdered form. It has major antioxidant properties.

Fresh (leaves), seeds, and powdered, are the forms of Dhania used in Nepali cuisine. Coriander seeds possess anti-rheumatic and anti-arthritic properties (helping reduce the swelling these diseases cause), as well as phosphorous, vitamins A and C, and antioxidants.  Citronelol, a natural antiseptic is present in coriander, and aids fresh breath and the healing of ulcers.

Coriander has been known to provide major benefits to health of the eyes, and helps in reducing cholesterol, and bowel health (a curative for diarrhoea) and digestion, and is known to be effective in treating nausea, body fever, liver disorders, fever, coughs and respiratory tract infections. It contains some essential acids such as ascorbic acid, oleic acid, stearic acid and linoleic acid.

Cumin, which is used in both ground powder and whole seed forms (sometimes as a condiment with rock salt) is one of the main spices used in traditional medicine, and is known to fight food carried infections, and promote good digestion, and helps with pain relief, the good functioning of the liver, and against coughs.  Cumin is also known to help weight loss and to bring down cholesterol and blood sugar.

Methi, nutty and slightly sweet in taste, is rich in carbohydrates, protein, fibre, and has high iron content, as well as magnesium and manganese. It has been used for millenia in Chinese Medicine (TCM) and is a common ingredient in South Asian dishes and in Nepali homes/kitchens.

It acts as a thickening agent in foods preparation, and is known to be effective in treating dermatological conditions, and a number of diseases such as diabetes, helps with breastmilk production, and is said to increase testosterone and libido levels in men (more research needed).  This last giving further supportive evidence to some forms of Buddhism giving injunctions on consumption of spices, that can increase sexual desire.

Garlic (a member of the onion family)  is renowned for its powerful properties for combatting the common cold and sickness, and reducing cholesterol  Medical research has found that garlic is potent in regard to inhibiting or lowering high blood pressure.

Ginger (a root vegetable) is filled with bioactive compounds and nutrients of many of the most important kinds.  One of the major spices, having it is said major positive health benefits for your brain and body, it has been from the earliest times a respected component of Nepali and South and East Asian traditional health maintaining and restorative systems. Ginger also improves your digestive system.

Red peppercorns, better known as Szechuan peppercorn is red/pink in colour and course or ground are also used on their own or in combination with other spices, in some Nepali dishes: they have a strong pungent taste, and a citrus type flavour.  They are a good source of vitamin A, thiamine, pyridoxine, carotenes, and minerals such as iron, zinc, selenium, potassium, and copper. Szechuan peppers also contain essential oils not found in other peppers, and are said digestion.

Sesame seeds come in black and white forms (in the UK best known for being used on rolls and burger buns) and are oil-rich.  Sesame seeds have been used in traditional medicine of many cultures across the world from the earliest times, and include vitamins  and B6, as well as iron, selenium, zinc, and copper. Sesame seeds are reputed to protect against arthritis, diabetes, and heart disease.

Masala is the generic name for various combinations of spices.

Spices have from the earliest times been used as a natural medicine and are known to have antimicrobial properties.  Spices come in different forms from seeds, bark to roots. Common major spices include, Coriander, Cumin, Turmeric, Ginger, Chili pepper, Rosemary, Black pepper, Red pepper, Saffron.

Spices come on their own or in combinations of various kinds (one of the hotter kinds being Garam Masala). In cookery spices are famous for their various flavours, but also colours.  Spices are said to be effective in improving various health conditions and needs, including but not limited to  Alzheimer’s, Arthritis, cancer, and low mood.

Nutrients and particularities: Turmeric, known as Besar in Nepali contains fibre, carbohydrate and some protein.  It also contains vitamin C and a number of the B vitamins.  It is Nepali cooking, particularly important however for its distinctive light orange-yellow colour.