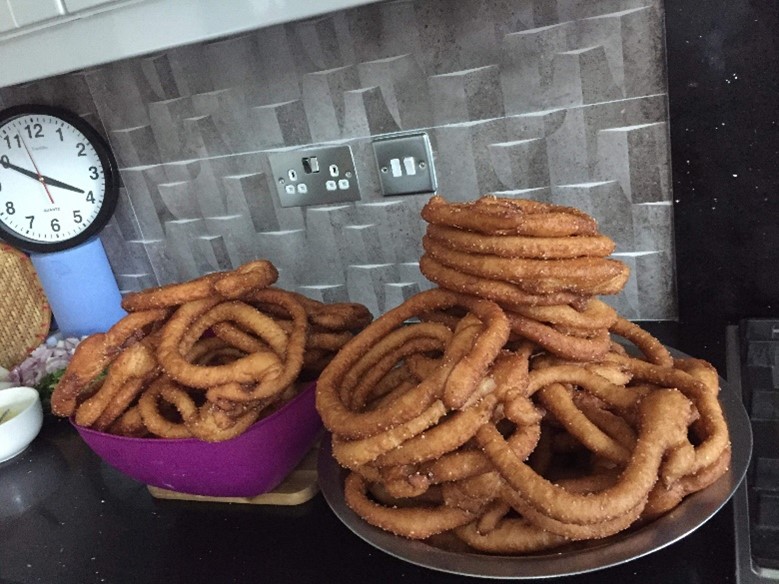 In addition to meals and snacks per se, there are also special days of festivity, may of which are festival, cultural and/or spiritual related; on these occasions there are often special types of food prepared.  There are many of these and some examples are provided below.

Sel Roti: Described as the ‘Nepal Donut’ (IMAGE ABOVE) the Sel Roti is a circular, ring-shaped special bread prepared in many UK Nepali homes for in particular the Dashain period (particularly Maghe Sankranti and Tihar) in October.  Sel roti often includes banana in its ingredients; it has a delicate sweetness.  Sel Roti are also very popular due to their convenience for eating standing as well as seated, at major UK Nepali cultural and other gatherings such as the annual Gurkha Football Cup in Aldershot, or at societies (samaj) annual dinners and functions, which of course also always include dal bhat served on a come up and fill your plate basis from large heated containers.

Chiura: Chiura, or beaten rice is also commonly available on those major special event occasions, as well as in social settings. This for practical reasons has to be imported, and is rice beaten flat which is an ideal accompaniment to the sauce of curry. In the stomach, Chiura expands, which means that is very filling, yet light to store and carry, and with a long life, which has made it an ideal food to carry with one in Nepal, especially in earlier times when out in the fields or to this day when travelling far from home or villages and towns.   It is certainly very popular in Nepali households in the UK and at large community events.

Gundruk: Gundruk is made from fermented vegetables (particularly leafy ones) radish and bamboo shoots.  It is extremely popular in Nepal due to its piquancy, mushroom type taste, and its saltiness, and makes an ideal accompaniment to dal bhat, but also dhindo (see below). It is one of the most regularly sought food items to be brought from Nepal to the UK and gives great delight when part of the food available on social occasions in Nepali homes in Britain.

It has a legend relating to its origin, and that is that in ancient times, when what was eventually to be come Nepal, especially the Kathmandu Valley, used to be invaded from north and south for its riches (including particularly agricultural produce, including radishes and leafy vegetables, the farmers of Nepal came up with a solution.  Knowing that such raids were temporary and of quite short duration, the farmers would bury vegetables, including leafy greens and radish, in the ground to be retrieved later, rather than letting their produce be taken.

It appears that one such raid lasted longer, and by the time it was safe to recover the buried agricultural produce, the latter had started to decompose through a combination of moisture and warmth.  This is said to be the accidental cause of the discovery of Gundruk (and the closely related Sinki).

Bara:  Bara (pronounced Bada) – a Newari food item of functional kind– are small circular pancakes (known as the Nepali pancake) that are made of according to the classic Bara recipe, rice flour, black lentils, cumin, Asafoetida (known in Nepali as ‘Hing’), turmeric, fresh chopped ginger and salt, with cooking taking place in a frying pan with oil.  They are very popular and often cooked in Nepali UK households for snacks; delicious on their own, often they serve as the base for a spoonful of achar/spicy pickle on top and can also incorporate egg (sunny side up placed on a bara) and meats (in Nepal minced buffalo meat is especially prized) for non-vegans and non-vegetarians.

Chatamari:  Also of Newari origin, this functional snack (styled by some as the Nepali pizza) is similar to a bara, but thinner, and has been compared to a French crepe. It is more for holding toppings (such as diced onion, egg, chopped chili, meats that are minced, but fresh chopped dhania/coriander too) than eating on its own.

Yomari: Yomari (again, Newari) are rice pastries filled with coconut or molasses – a type of Nepali sweet pastry.  However they are much more than a snack, but have a spiritual very ancient context, as the food is an integral part of an actual festival (which takes place in November/December on a Lunar calender Full Moon day) known as the Yomari Punhi; Yomari are made and consumed on the same, festival, day.  Yomari Punhi celebrates the interconnection of humankind and Nature through food, in marking the end of the rice harvest.  In the UK, Yomari are relatively rarely found as they relate to ancient beliefs of specifically Newa Nepali community members.

Dhindo: Dhindo (a famous Thakali staple dish), known as ‘mountain fuel’ – a type of gruel (formed through beating with a wooden spoon, until the latter can literally stand up once sunk in it) made of ground millet — is not a regular food to be found in UK Nepali homes (except and rarely in some Tharu Nepali homes here), but is worth a brief description. Visually dhindo, a light grey colour, looks like grey mashed potato or porridge.  It is not spicy or with a strong flavour, but is very important as source of energy and nutrition (building and maintaining stamina) for those in the middle and higher Himalaya.  Fresh chilis, gundruk (including in a soup) are ideal accompaniments, as are meat (especially spiced chicken) broths. 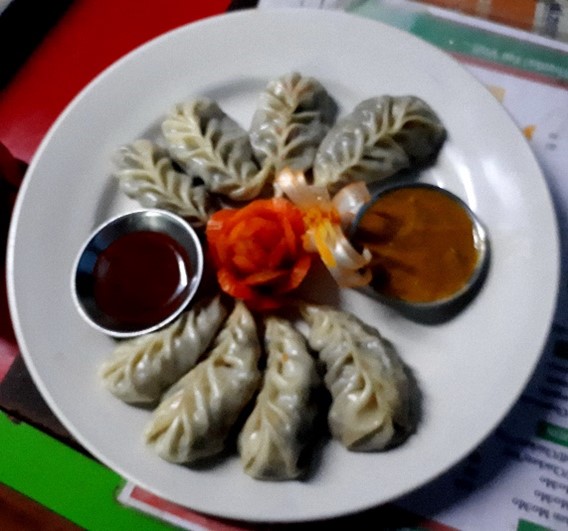 Momos: the origin of the creation of Nepal’s favourite food, momos, lies back in ancient times.  There had always been extensive trade related interaction with the Kingdom of Tibet to the north of Nepal, with that kingdom reaching its greatest territorial extent (at the least half the size of modern China) circa 800, when Nepal itself was for a while included within the kingdom. So we know that at least from then and probably earlier, there was extensive trade between Newari merchants of Kathmandu Valley and the capital of Tibet, Lhasa, in which Newari merchants found in Lhasa ‘momocha’ – yak meat filled dumplings.  It was by these means, international trade, that momocha were introduced to Kathmandu Valley and underwent a major transformation.  This involved the filling but functional Tibetan dumplings being developed in to the Nepali momo. Tibet, a land of hard, forbidding terrain, had little indigenous food culture that had use of spices as its main feature, unlike in Nepal in the South Asian, very different food cultural zone.  Consequently momos had the key element of multiple spices and ingredients being added, with buffalo meat becoming more important than yak, and substantial vegetarian variants created too.

The Nepali momo spices and ingredients are very distinct, but certainly have parallels with the Chinese dumplings (including on shapes: round or crescent) – Jiaozi — and therefore the East Asian food cultural zone, that like its South Asian counterpart greatly valued extensive use of spices and seasonings as both these great regions had far more options for both of the latter available locally, compared to the arid cold Tibetan Plateau.  As many UK Nepali community members share, there were important arts and crafts interactions between Nepal and the Yuan (Mongol) Empire of China, of Nepali craftsmen – most famously Araniko (https://en.wikipedia.org/wiki/Araniko) – including to the capital of China and the Court of the Chinese Emperor.

As it is not yet clear exactly the chronology of the Tibetan momocha becoming the famous, Nepali momo, it is quite possible that some of the direct Kathmandu Valley craftsmen travels to and from the capital of the Yuan Emperor, may have played some part in regard to creating the momo, renowned for its artfully combined spices and ingredients.  It is almost certain that the Nepali craftsmen in their works and travels would have encountered the Chinese Jiaozi, and noted their spicy nature and varied fillings – fillings including ginger and garlic: important ingredients in Nepali & South Asian cuisines.

The story of the momo is not however complete without reference to its classic and delicious accompaniment (itself made of multiple ingredients and spices): Tomato Achar/spicy pickle, dabbed on momos, or with momos dipped in the latter.  The Chinese accompaniments to their Jiaozi are either chili oil or soy (often mixed with fresh chopped chili): these are very different to Nepali Tomato Achar. 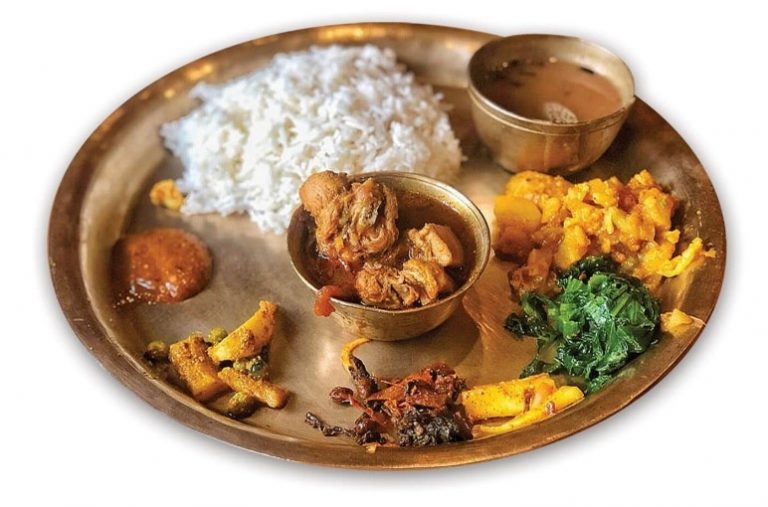 After Newari cuisine, Thakali, the cuisine of the Tharu people is famous for its contribution to Nepal’s foods culture; as with the momo, it is a cuisine type directly linked to trade.

It is renowned for not only its dishes and types of cooking, but also utensils which in the case of the Thali, a brass tray, brass cups, bowls and cutlery (sometimes also in copper or silver) is the most famous image of Nepal’s food culture (IMAGE ABOVE).  The story of Thakali cuisine relates directly to the Tibet to Terai (and Hindustan beyond) trade routes (Thakali people being renowned merchants from very early times), with Pokhara being a particularly important centre, whilst the home district of Thakali is the Thok-Khola Valley populated by Thakali people. Staple Thakali ingredients include from the north, millet, buckwheat, barley and dal, and from the lowlands, rice, other forms of dal, as well as maize.

Thakali dishes (a blend of Tibetan and Lowland derived foods) are predominantly meat ones, from yak, to sheep breeds imported from Tibet.  Poles are fixed near fires with thin slices of meat attached to the poles, to cook and dry.  These meats are then often added to curries. They are often also sautéed in ghee (butter),and made particularly flavoursome when dipped in the Thakali mix of Szechuan pepper, local herbs (many varieties of these throughout the different valleys and mid-hills) and chili powder which combined are known as timur-ko-choup.   The latter is also used to season omelettes, potatoes and boiled eggs. The grey Dhindo is perhaps the most famous Thakali food.

Thakali culture is also renowned for the famous hot millet alcohol drink, Tongba, served in bamboo drums/flagons that have a metal drum in the centre in which millet ferments and hot water is added, and the resulting heady brew drunk through a straw, and topped up with more hot water.  Thakali cuisine was and continues to be provided at inns, known as Bhattis, by the Thakali people along the north – south trade routes.