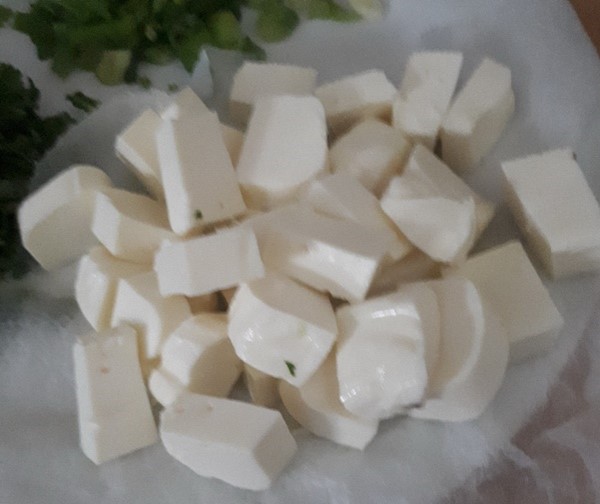 These ingredients (such as fresh sliced & cubed Paneer above) do not fit directly in to the main – vegetable and meats to spices & herbs and fruits, yet which are essential or major ingredients for many Nepali dishes (home-cooked and other).

In Nepal, South Asia and other lands Ghee is used as lamp fuel, commonly in festivals such as Deepawali, The Festival of Lights. It has a buttery and nutty taste, It is considered as superior in taste and quality to cooking oils, animal fats and conventional butter. It has s high level of saturated fat but many believe this is outweighed by many health benefits.

Eggs are a source of high-quality protein, riboflavin and selenium (mainly egg white), with highest concentrations of nutrients found in the yolk.  These include in particular vitamin D (eggs are one of the very few foods that contain this important vitamin naturally), which is beneficial for immune functioning and bone development and health.

Milk contains protein, potassium, calcium, iodine, phosphorus, as well as vitamin B2 and vitamin B12.

In Nepali cooking in Nepal, and still for general preference in diaspora communities such as the UK, liquified Ghee [clarified butter] is often preferred as the oil used for cooking.  Ghee is derived from animal fats (so not suitable for vegetarians), but there is a vegetable variant.

Animal fat (traditional) Ghee is a clarified composed almost entirely of fat, of which 60%+ are saturates, and contains a trace of Protein.  Ghee in reasonable quantities can help in weight loss, it is claimed, when combined with an exercise regime, and it is reputedly good for digestion, building up the energy levels, bone strength, and the functioning of the brain (memory improvement).

Other oils used are all vegetable derived, some of which are increasingly competing with Ghee in Nepali cookery: vegetable oils are rich in the antioxidant Vitamin E. Here are some:

Sunflower oil: contains all the most important nutrients the body requires, and is a good source of vitamin E.  It is known to assist in lowering cholesterol, helps the effective functioning of the nervous system, and reduces dangers of developing cardiovascular diseases. Commonly by many members of the UK Nepali diaspora.

Olive oil: contains substantial amounts of antioxidants, which reduce risks of Alzheimer’s and Parkinson’s Disease, and pain in the joints. It is considered that Olive oil has properties important for fighting risks and the effects of strokes.  Commonly by many members of the UK Nepali diaspora, often in its Extra Virgin form.

Mustard oil: has antibacterial properties, and helps to prevent colds & coughs, and assists with improving dermatological conditions. It also helps circulation and digestion.  Recommended oil for cooking some dishes due to its particular aromatic qualities.

Flaxseed oil: rich is rich in Omega 3 fatty acids, beneficial to health and regarded as having curative impacts on Colitis and Crohn’s Disease.

Paneer is high in protein and as such often for Nepali and other South Asians following vegetarian regimes for dietary or cultural reasons, provides much of the protein that found in meats. It is much preferred to Western dairy cheeses, is high in calories, sodium, saturated fat, cholesterol, and sodium.   and is rich in riboflavin, potassium, phosphorus, calcium, selenium, and vitamins A, D and B12.

Rice noodles are white in colour (there are variants to this where additional very small quantities of other ingredients can cause them to be brown in colour, etc.), very mild in flavour, and are made from rice flour.  They originated in the Far East / China (existing there for some 3000 years, and famously discovered by Marco Polo, who introduced them to Europe, where they formed the genesis for pasta.  They are low in nutrients (the only vitamins are B ones, such as B6 and folate, niacin), but high in carbohydrates and in calories, and in regard to their important carbohydrate content have similarities as a meal-base, with rice itself, and comparable to the potato in terms of roughage content: as such modest quantities are advised.

Its fibre is not easily assimilated by the stomach, hence giving a filling effect.  Egg noodles are considerably higher in calories.  Rice noodles are very low in sodium, making them quite a healthy option; Soy Sauce is often used to adjust this in East Asian dishes, and in Nepali / South Asian dishes such as Chau Chau.  Great care has to be taken with the amount of cooking oil used with fried noodles; these should never be presented swimming in oil, but only present to taste in very modest amount.  Deepak Tamrakar’s version of Nepali fried chau chau follows this rule rigorously, for example.

Salt is an essential nutrient, composed of 60% chloride, 40% sodium.  Infamous for, when taken in excess, salt raises blood pressure caused by its water retention capacity.  Vegetables contain sufficient amounts of sodium for your body’s needs, meaning salt isn’t required. It is famous for bringing out flavours in foods: Nepal is associated with the internationally renowned Himalayan salt.

Comes in pink and black forms

Himalayan Salt is also known as ‘Pink Halite’ and yes, it is a form of (edible) crystal. It has many metaphysical properties and benefits. Himalayan crystal Mineral Salt has gentle, but strong grounding and centering energies and is said to bring abundance and prosperity into a home.

The benefits of Himalayan salt sole include:

In Ayurveda sugarcane is known as Ikṣu and sugarcane juice as Phāṇita. Crystallized sugar was discovered during the Gupta dynasties in the 5th century.  The crystals produced were named at that time, khanda, from which the modern English name candy is derived.

Natural Yogurt is a rich source of protein, and is made by adding live bacteria to milk, providing many health benefits not given through milk per se, including potential probiotic functions. It complements very well the spicy component of Nepali and South Asian cuisines in different ways to that provided by boiled rice. It has been eaten for very early times.