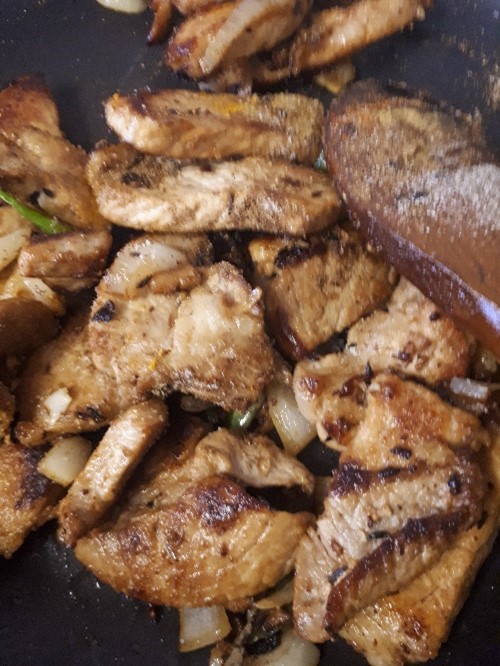 Information on the nutritional qualities of the main Nepali meat dishes is provided here, and also regarding fish which is used more in home cooking in Nepali diaspora community homes due to greater availability of fish and seafood than is the case in Nepal.

It is a red meat, and in its lean form rich in vitamins and minerals such as zinc and iron, and is mainly composed of monosaturated and saturated fats. It also contains major fatty acids such as palmitic, stearic, and oleic: lean beef taken in moderation is compatible with following a healthy diet.

Buffalo Meat, that contains high levels of iron and protein, is, compared to other meats (such as chicken) low in fat (especially saturated fat), and low in sodium, cholesterol and also calories.

Chicken provides much greater protein density than red meats and is a good source of creatine (this is produced naturally by the human body and is a compound three important amino acids).  Chicken meat provides substantial quantities of all the essential B vitamins, such as niacin (B3), which are essential for having a healthy brain and for energy metabolism.

Duck meat is a good source of B vitamins, iron, zinc, selenium, and protein. It’s skin is rich in saturated, polyunsaturated and monosaturated fats.

Goat is a major delicacy in Nepal, and as leaner than other meats (perhaps yak excepted) is low in cholesterol, calories and saturated fat and in sodium levels compared to other meats such as pork, chicken, beef and lamb, and has much higher levels of iron than all of the latter, and good potassium content. Goat meat is a very good source of protein and vitamin B (especially vitamin B12 which helps maintain healthy skin).

Lamb is rich in zinc and iron, vitamin B12, and a major source of high-quality protein. Lamb consumed on a regular basis in moderate quantities is said to promote good muscle growth and muscle maintenance.

Sheep meat (mutton) is a rich source of copper, iron, phosphorus, protein, amino acids, as well as vitamin B6, B12, and thiamine. Mutton is popular throughout Nepal.

Yak is a dark red ultra-lean meat that is virtually fat-free (a sixth the fat of beef), much lower in calories and cholesterol than beef (but from a gastronomic perspective, similar in taste to beef), with high quantities of important health enhancing acids and Omega 3 oils.