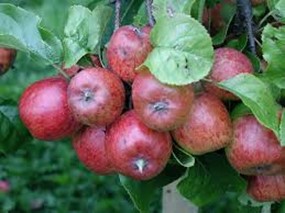 Apples are rich in many minerals and vitamins, in particular ascorbic acid (better known as vitamin C) a key nutrient for major functions of your body.

Bitter Gourd (or Bitter Melon), better known as Kerala is closely related to cucumber, pumpkin, zucchini: it is a tropical zone vine which is part of the gourd family. It is particularly rich in vitamin C, vitamin A, provides folate, and has traces of iron, zinc, and potassium.  It also contains some important acids such as catechin, epicatechin, and chlorogenic acid, and gallic acid.

The Nepal-Indian kerala, which has (hence the English name) a bitter, nutty taste, is quite narrow with spikes and pointed ends, and is a staple vegetable in many Asian cuisines.

Cucumbers are a type of fruit and a good source of phytonutrients.  Phyto nutrients are chemicals found in plants that have disease preventative and protective properties.  In the case of cucumber the phytonutrients are lignans, flavonoids, and triterpenes, which are antioxidants, and have anti-inflammatory effects, and are said to have anticancer benefits.

Lemons are rich in flavonoids, potassium, folate, compounds known as limonins, and in vitamin C.

Limes are high in vitamin C, and contain magnesium, niacin, folate, thiamine, vitamin B6, calcium, potassium, and iron, as well as riboflavin. There are different types of lime such as Persian, Desert, Kaffir, and Key. Their taste is sour and they are important as a flavouring in some foods and drinks.

Eating mango is good for eyesight and the digestive system and may lower risk of some forms of cancer. This fruit is rich in vitamin A, B6, E, B5, K, copper, niacin, thiamine, manganese, potassium, and riboflavin.

Bell peppers have major concentrations of Vitamin C; they also include vitamin A, E, and K1, as well as potassium and folate.

Watermelons are rich in vitamin A, C and B6, amino acids, lycopene and antioxidants.